“A Third Culture Kid (TCK) is a person who has spent a significant part of his or her developmental years outside the parents’ culture. The TCK frequently builds relationships to all of the cultures, while not having full ownership in any. Although elements from each culture may be assimilated into the TCK’s life experience, the sense of belonging is in relationship to others of similar background.”
– David C. Pollock

Not every Third Culture Kid’s experience is exactly like another and when it comes to language study the same is true.  I have known some TCKs who are bilingual from their time growing up between two countries.  There are TCKs who only know one language from not being immersed in a second language while others know multiple languages.

When I was living in England I was learning French at school.  I moved to Italy and French lessons were replaced by Italian.  Three years later I am in Germany learning German.  Two years pass and I am back in Italy learning Italian again.  Two and a half years later and I am stateside in town where Spanish is spoken a sizable part of the population. On top of going to english speaking schools added to the high mobility I went off to University fluent only in English.  I have a well traveled vocabulary in some countries and know just a few choice words or phrases in others.

Not being completely fluent in any other language has always been on thing I want to overcome.

In recent years I have tried learning Italian again or have ventured into German and French.  Italian makes sense to study as Italy still is the ranking champion of the one place in the world I have lived the longest in my life.  German is spoken in the three countries I would love most to move to next in Europe: Austria, Switzerland, and of course Germany. Living in England and being so close to France makes French seem ideal. Not to mention it is officially spoken in thirty three countries around the world.

I am a Third Culture Kid who keeps hopping between each language not knowing which one to go with whole heartedly.

This weekend I took my boys to the library and filled my arms up with french language books from the children’s section.  While my bookshelf at home boasts many language books, I like getting books that will engage my children as we do language study together.  On my walk over to them I noticed a lone Chinese language book and grabbed it as well. I asked my boys which language they would like to learn and the both chose Mandarin. Being that husband knows Mandarin I decided to go with it. 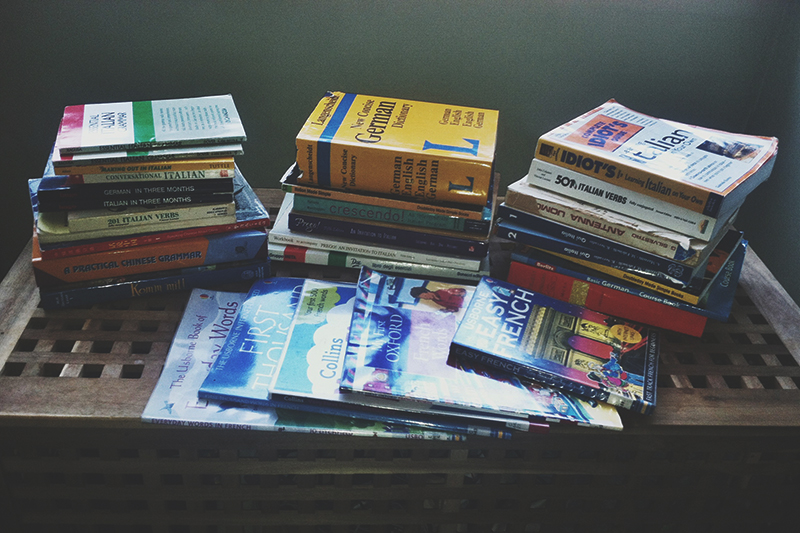 Mandarin.  It challenges me because I do not feel confidant with how to go about learning it most effectively.  A tonal language without an alphabet intimidated me in the past when I attempted to learn.  My kids on the other hand are very excited about it and love learning it.  This has been my biggest motivation.  I want to offer my kids something I never had growing up, being fluent in another language.  From here we go onward and do our best to learn Mandarin.

Q: I would love to hear you thoughts on languages.
Do you speak other languages or are you learning any now?
Do you speak Mandarin Chinese?