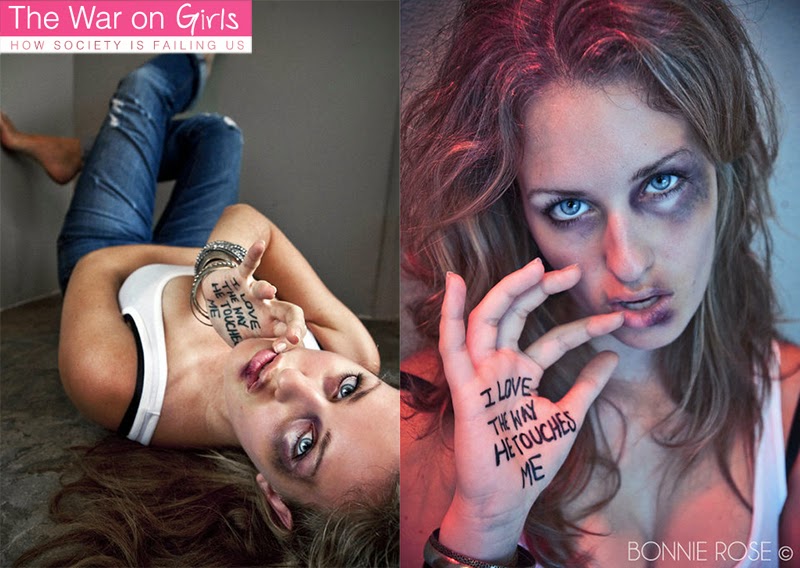 What I write today for the War on Girls: How Society Has Failed Us, is not a new story nor the last  I want to share.  I did photography project in 2010 entitled The Secret Lies of Men & Women, which all began with one idea.  To share the story of women who get stuck in abusive relationships and feel they have no way out. I remember trying to help a friend in that situation and it tore me apart as the person on the outside.  It did not seem to matter what I said or what I did, I felt powerless in my attempt to stop it. I remember feeling crying to the police when I called them for help and they said in situations like these they could not really do much unless she comes forward.  It was terrifying for me to hear the things she told me that were happening, and more so when she defended the man when we talked to the police. What has society done to our women that we feel we get what deserve? My friend ended up getting a happy ending, but not so many are that fortunate.  I cannot help but think that our media is only continuing this problem.  With both the way men see women and the way we see ourselves.  I entitled this entry off a film I recommend you watch about how women are portrayed in the media: Miss Representation.
Last week I continued this series with a talk about how magazines had a way of impacting my view of my self and the world from the impressionable age of a young girl.  In current times the social media has an even greater impact on our youth. They can easily spend half the day consuming media.  That is not media based on facts, but a value system that is dictated by marketing and advertisers.  Just take a look at the television programme, Mad Men.  It really opened my eyes to how the world of advertising works.  There is a product and for money people will say what people want to hear in order to feel the need to have it.  Otherwise it would be bad advertising and not help the number of sales for that product. It only takes my sons a short while watching television with their grandparents to start telling me what they want and repeating the commercial word for word.  Unfortunately the media is not only telling us how we should feel about certain products.  They are conditioning our minds with how we should look at women.  This essentially is making a woman an object and what could be more dehumanizing to an individual than making them into a thing.
I love the idea of princesses and loved feeling like one in my wedding dress at my vow renewal this year. As a British American I grew up in love with Princess Diana and as a young girl fell in love with Disney princesses.  Now that I am an adult I have been looking in retrospect on the whole princess idea.  It seems like a good thing that got off course.  When did it go from being playtime of dress up and fun and into an unattainable but must have goal for our young girls?  They are not even into double digits in age and they are being told that they are not good enough.  I am the first person to tell you I love Disney and have so many fond memories as a child and as an adult to going to the ‘happiest place on earth’ with my family.  However, I look at how the princesses are manufactured and advertised to our girls and I get tears in my eyes.  The beloved princesses I grew up with are no longer ‘good enough’ and have received makeovers that make them look even more like beautiful adults on the verge of being too sexy.  I tried finding the same thing happening for our favourite male animations and honestly they still all look the same to me.  So why should our childhood role models need to have smaller waists, bigger boobs, more contoured faces with more make up and even better hair? 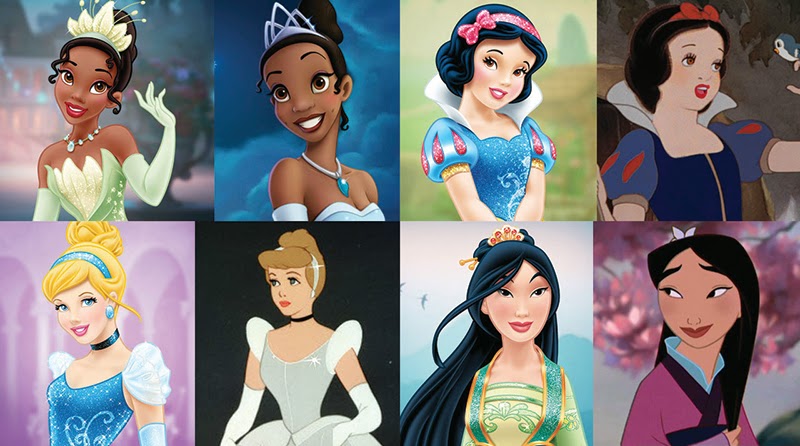 If having to be a certain standard and a certain look is not enough it is the way women and girls are portrayed that start us out on the wrong outlook on life.  If princesses taught me anything it was that my ‘true love would come’.  It is a world of waiting and being saved.  I remember being elementary school aged and making my guys friends let me be the princess and telling them to come rescue me. I grew up watching the original Star Wars with my dad.  Princess Leia might have been a strong woman with quick one liners but she was no better than the other princesses I loved.  She was a princess needed to be rescued by two strong men (and a wookie) and again when dressed up this time as a sexy slave girl.
Which brings me to my next point that the majority of women in the media are either portrayed as princesses waiting to be saved or as sex bombs.  If you are anything else you are probably not pretty enough, not thin enough, and not young enough.  After all it is about 70% of women on television that are portrayed in their twenties and thirties.  Is that when our beauty fades and we all have an expiration date?  Where are the real women and why are they pushed out of our media?  Why do the strong ones who make it through it then have to be scrutinized and objectified by how they look. It is never about their message or what they stand for but why they do or do not look a certain way.  In the film Miss Representation they clearly show how men in the media and news are destructive to empowered women and put them down.  It is either that those who say such things are just outward mean people or that they feel threatened.  Either way it is showing young girls that if you want to be in a position of power where you can make a change, you are going to be objectified for being a girl. Why does being a girl have to be any less than being a guy and why should men dictate what it should mean to be a girl?  The percentage of women in those high up decision making processes is so small that it is no wonder we live in a world of ‘teenage boys’.  A world where women can watch shows geared towards men but men would be looked down to be watching shows made for women.  What makes women second class citizens and why do we keep letting it happen?
I look at how men are portrayed in the world I lived.  I grew up in a conservative church where only men could have roles in worship.  While my British side has had queens and a female prime minister, my American side has yet to have a female president and hold less than 20% of political offices.  Men who sleep around a lot are portrayed as masculine and strong and women are portrayed as beautiful and those who sleep around a lot are sluts. It is a contradiction that has been brought up before but still happens today. It is just a part of how women are treated less fairly as men. Tell me the last time you saw men on a magazine showing how they had gained fifteen pounds and it was considered news. The only articles I could find in a quick search were those of men who had lost or gained a significant amount of weight for a movie role…for their profession.  Women can be too sexy but when is a man too sexy?  If a woman does modeling in her youth it can hinder her job prospects as an adult for being a woman and discredits everything else about her. I cannot come up with a perfect comparison for a man in the same regard.
In the end change will only come with hard work. Despite where women are in today’s world we still have a long way to go to break up the stigmas and change how society looks at women.  If not for us for the little girls growing up in today’s world.

“We will have to repent in this generation not merely for the vitriolic words and actions of the bad people, but for the appalling silence of the good people. We must come to see that human progress never rolls in on wheels of inevitability.” – MLK
————-
This post is compilation of many conversations I have had over the years.
I highly recommend you watch the trailer below for Miss Representation
and then see the film if you have not yet.
*Main photo for this post belongs to Bonnie Rose Photography © 2007 – 2013 All Rights Reserved
**Disney photographs were found from Jezebel.com and their article Sexy Merida Makeover