I recently posted photos of the the leaves that have changed colours and fallen on the ground. It is quite a beautiful scene, and I am still in awe when when I go walking outside. There is another aspect of the season that is new to me, and that is how dark it gets so early. Reason being that England is closer in proximity to the North Pole, than other places I have lived last. The last eight months that I lived in the US I was living in Tucson, Arizona and before that I was in Hawaii for three years. Both of those places do not change the clocks forward or backwards as the seasons change. So now I will be at work looking outside, and its half past 4 in the afternoon and its already begun to get dark. It makes the days feel so much shorter and my nights to be feeling as if it is later than it actually says on the clock. The skies in England have been a lot darker or more overcast than they had been earlier this summer. I have been noticing little elements of Fall while I am outside and try to capture them in photograph. Here are a few aspects of Autumn in England that I have noticed and loved.

The boys and I have really been enjoying the Autumn season here in England.  After spending three years living in Hawaii and a brief stay in the desert in Arizona, having a real Autumn is a beautiful treat.  There is nothing like the changing of the leaves to make you aware that Summer is indeed over.  We have donned our heavier coats on colder days and sometimes find the need for wellingtons when its wet and dreary outside.  I have even coloured my hair (finally a ginger!) to go with the changing colours of the leaves.  Ronan has been assigned in school a project about the different trees and their leaves.  We have been collecting different leaves when we are outside and taking them home.  Tonight Ronan glued the best ones to his papers and worked like a sleuth to figure out what tree it originated from.   He loves investigating and has a keen appreciation for art and crafts, so this was a really fun project.  I have to be honest though.  I think what Ronan and Maddox love best is simply playing in all the fallen leaves.  Throwing them up in the air so they can rain down on them causes great big smiles and laughter is soon to follow as we crunch the leaves with our feet as we walk through a dense pile on the ground.  Summer is a lovely and much awaited season, but with the arrival of Fall it does not mean an End.  It is simply a beginning to the cooler seasons and means that Winter and the Holidays are fast approaching. 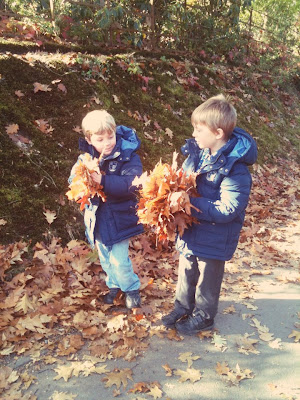 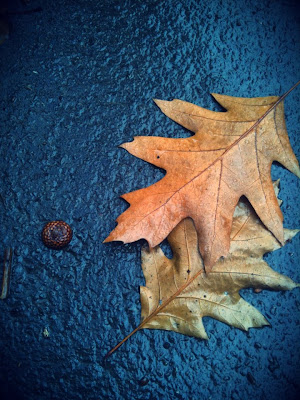 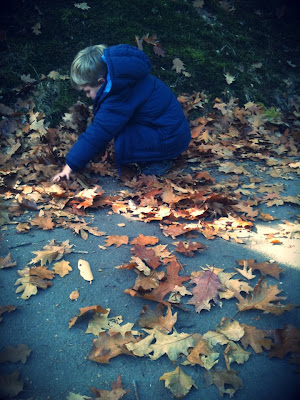 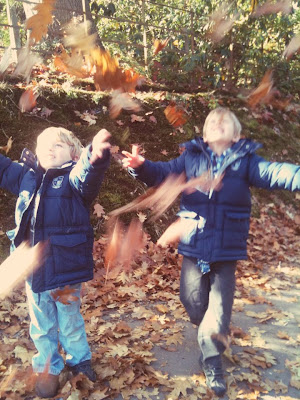