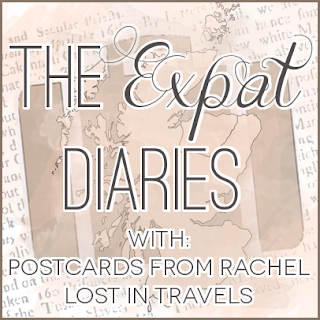 The #ExpatDiaries Link up with: Postcards from Rachel & Lost in Travels
Expat life.
Living abroad.
Being close to amazing new places to where you can travel.
The world is your oyster.  Sounds pretty glamorous right?
Yes. Yes. YES! Lets go!

via
How about the things that people do not tell you about living the Expat life? For instance what about all the things you will pack or move with you?  For me, being brought up as a military kid, I thought I knew what to expect.  However even with the best made plans something can go wrong or unexpected.

What Do You Bring with You as an Expat?

Household goods.  For those of you living in your home country, who have not yet embarked on the life of an expat, take a look around your house.  How many belongings have you collected over the years?  How many boxes would it take to pack it all up? Wedding gifts and heirlooms? Holiday decorations? Will your kitchen appliances, beauty tools, and electronics work on the voltage system in your host country? Depending on the weight can determine how much it will cost to ship your household goods overseas.  Do you you have a lot of heavy items like books?  How about your furniture? Are you shipping over a vehicle? Will you leave things in storage?
“This can all come right?”

This is how we moved to England.  In suitcases and carry ons.  Between Ryan and I that was five suitcases, two carry-ons, and two ‘personal item’ bags that carried our laptops and camera equipment. We got out of the airport and realised there were no lifts in the train stations in England.  Which meant I had to leave suitcases as I took one down/up stairs, to return and get the rest.  That formula was repeated several times just to get from Heathrow in London down to the southern coastal city of Brighton.  We looked like travelers that had never left their country before and had no clue on how to pack.
“Only the first suitcase is free? I can’t pack everything in one bag!”

via
What You Can Afford
T O   S H I P   O V E R S E A S
When my husband got out of the military we were stationed on Oahu, Hawaii.  The military would pack up and move our stuff as far as his ‘home’.  His last home of record was Arizona and that was still quite a long ways a way from where we would be moving to in England.  We could either pay the difference or burn all our possessions in a massive fire in Arizona. The later was not really an option. Nor was leaving anything behind in storage.  We got rid of all our furniture and then did a mass scale back of what we owned.  We were actually surprised with what we had when it arrived in England.  Then more surprised as months went on and we realised what we did not have.  Cue Christmas and realizing that our big rubbermaid container of holiday decorations, ornaments, christmas trees, and holiday photos did not make the cut.
“Christmas is cancelled.”

As we made our final stop in the US before moving abroad to England, there were still things that we would need but not as urgently as our first couple of months.  If you are a person who as traveled and moved all her life like me you take the time to pack that stuff up in small ready to mail boxes.  However if you leave your stuff at in laws who dislike you, they will conveniently ‘lose’ these things in their storage but oddly enough keep things for you that you had thought was going to the charity shop.  Keep in mind that boxes and shipping prices can be quite costly.  Also if you have anyone mailing things to you be aware of what charges your host country will tack on.  We have had to pay £25 and up just to pick up packages from family because they put the price of the contents over a certain amount. Which is quite an unexpected surprise when you go to pick up the mail.
“WHY?!?”

For us we do not plan to move back stateside.  We also do not have any place in the US where we could call ‘home’.  We also felt that if we could go without things for two years or more than we really did not need to hang on to them only to have it sit in a storage facility.  To me thats nothing short of hoarding. Even my mum has gone through her things in her garage so that she only has what she needs and will use. This is what worked for us. It may not work for everyone.  You may even know that you will return even if you do not have a certain date set in stone.  Why take things that could break or be lost if you could keep them in storage or at a relatives.  Just be smart and keep what you think is best.
“Get rid of it all!”

For the majority of my life and all the moves that has come with it, the US military had always moved my household goods.  I never had to worry about the weight of my belongings or having to sort what I could part with and what was essential. To be honest I think as a teenager the military probably moved a whole lot of ‘junk’ and paperwork that I did not really need to hang onto at that point. We have moved within England four times in the last two years.  The first two moves we only had what we brought with us on the plane so we needed nothing short of a taxi.  However our move from Brighton up to Bath was our first move of everything we have here in England and to a distance that is hours away.
“What? I have to leave stuff behind???”

via
What We Learned from Moving within England:
Even moving within the country can be quite costly.  As we do not have a drivers license to drive our own moving truck we had to look to moving companies here in England.  They call them ‘removers’.  After an email inquiry and phone consultation about our estimate they set up our moving date.  This was the first time I have ever experienced a ‘two day job’ and unfortunately it became three days.  Long story short is they packed up everything in boxes for us the first day and then came with a moving van the second day.
“Customer service in England?”

via
However the van they brought the second day was no where large enough to put in everything they packed up and our furniture.  So they scheduled for a larger van the next day.  To me this van was no bigger, though technically it was somehow larger, and I got the same reaction again.  I should point out that each day in this process it has been a different set of men, never the same guy twice.  We eventually just had to say ‘okay, take this and this, and leave this’.
“Why can’t you just do your job correctly?”

via
What We Had to Do When the Moving Experience Went Bad:
My husband later drove down with my mum from Bath with the largest rental car they could get to try and bring what they could.  Rental cars are mostly all small here in england and there were no ‘mini van’ options.  So in the end there were many things that did not come with us including furniture.  Literally my husband kept taking photos of the car packed with what they could fit around three adults and what was still in the apartment. It was frustrating to say the least. I think the one item I have been most sad for is my sewing machine.  It ended up costing more than we planned or had to spend and then some for the items we had to replace that included a couch to sit on in our living room.  So we learned that moving here is costly and has made us not want to move in country any time soon.
“Just breath!”

What We Did Not Expect:
I do not think my husband and I fully realised what the statement meant when we would say ‘oh we can just buy this again in England’ or to what extent the more we said it back in the US.  Yes you can go without your dishes and appliances, but have you thought about how much dishes will add up when you need to buy them again?  I had been spoiled by places like Costco, Sam’s Club, Target, and yes even Walmart.  Places where you could find whatever you needed in one place, for a low price, and even in bulk.  It is not the way nor so easy in England.  We did not expect that.  In the end we have tried to slowly repurchase things we needed.  Which began with furniture from IKEA in December seven months after moving to England earlier in May.  Our kitchen still hosts as much appliances, dishes, and tools as a college dorm.  Which ironically matches the Dorm sized fridges in England.

via
What does the future bring for Expat Life?
The downside to social media websites like Facebook and Pinterest is that you get to see how your friends and family back ‘home’ live life or goals of how they would like to live.  Houses in many places back in the US are much larger than here and can be bought for almost as much as rent on a small flat in England.  Looking at the large houses my friends now own, the furniture they have acquired, the painting, and decorating that they have done makes me feel a little gutted that I have missed out on that experience.  However I would not trade that material ideal for the opportunity we have to live and travel abroad.  To each their own and this is the life we chosen.
“Where’s my three story house with a pool?”

via
Yes there are still thing we want and things that we need, but go with out.  I highly dislike that feeling of ‘want’.  I would rather be able to travel than look at our check list of things that would greatly improve life.  I know being here in England has really shifted my focus on shopping from the view it had when I was living the American life.  I said goodbye to the land of large, oversized, and available 24/7 and embraced the much smaller, more compact, and where-stores-close-at-5pm-on-a-Sunday ex-pat life.
“Its 6pm and we just ran out of milk.”

via
Q: Have you ever experienced moving abroad or to another country?
What were your expectations and how did they change after your move?