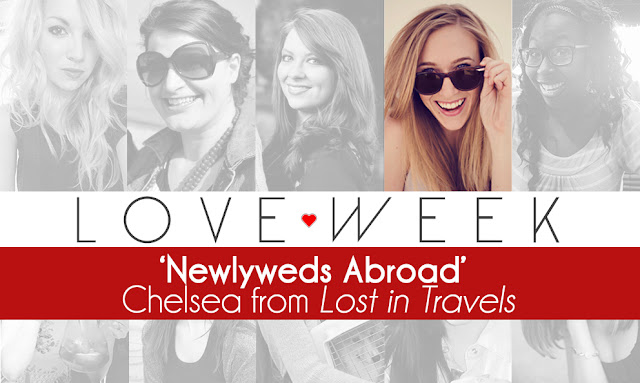 Are you loving LoveWeek?  Here in Wales Ryan and I are having such a great time celebrating our 10th Wedding Anniversary week with family and friends.  My sister Zoë just got into Wales yesterday night and so now our wedding party is complete! I have been so excited about sharing posts from this week that it will probably eventually become a series.  I was so inspired by Chelsea’s posts about her wedding that I was equally excited to ask her to participate in Love Week.  I love getting to know more about Chelsea because she is one of those loving life to the fullest individuals.  I have only known her a short while and she is always so helpful to me when I am in trouble or have a question from blogging or to where she gets some of her neat travel items like hammocks or tripods.  When she wrote back that she would love to participate I knew her post would be a perfect fit as she is a fellow expat living abroad.  It is why I come back to read her blog week after week, to read about the daily expat life and the latest travels that she takes with her husband around the world.  My husband and I moved abroad together after 8 years of marriage. But what would it be like to move abroad as newlyweds?  That is what Chelsea brings us today as day 5 in Love Week.  Thank you Chelsea so very much for writing on this subject and I know it will touch many lives out there in the blogger world.

Hey there! I’m Chelsea and I blog over at Lost in Travels. After my man and I got hitched two years ago, we started getting cold sweats every time we even thought about ‘settling down’ in our hometown. We wanted to do something out of the ordinary, something adventurous. We wanted to spend our lives traveling the globe. So what did we do? Sold all of our belongings that wouldn’t fit in two 50-pound bags and took the first flight to South Korea to teach English to snot nosed adorable little kids and never looked back! As you can imagine, living abroad can either be a blessing or a curse for a couple. In my eyes, it’s the exact opposite of long distance dating. Before we were married, we spent the first ten months of our relationship long distance, on opposite ends of the country. We hardly saw each other, only talked on the phone, and heavily relied on the presence of family and friends for support and advice.
Once we moved overseas, it was quite the opposite. Starting out we were working at the same school which meant seeing each other 24/7 in the most literal way possible. Knowing very few people, we were our own support system. In addition to that, the time difference of being 15 hours ahead of our home town made it difficult to just pick up the phone and call people closest to us. We were told by friends who had paved the way for us in Korea that living abroad was the best thing they ever did for their marriage, they had grown closer together than they had ever imagined. I wish I could say that as soon as we touched Korean soil, it was marital bliss. But that would be far from the truth. The first few months were hard; in addition to trying to get used to everything new in our lives (new career path, new language, new food, the list is endless) we were also still adjusting to married life since we moved just four short months after tying the knot. I remember thinking at one point ‘I thought living abroad was supposed to be easier!’ Thankfully, after a few months of being in Korea…it clicked. We grew accustomed to the new culture around us and more importantly, we grew together, worked together and began reaping the benefits of living abroad as a married couple.
While becoming our only friends overnight, in a strange land, were we lived, worked, ate and socialized together 24/7 was a challenge at first, it has turned into one of the biggest blessings I’ve ever experienced. Not only did we have more time to spend with each other than we ever did in the States, but we were also our only support system for the first part of living overseas. Back in the states I had the bad habit of calling a friend or my sister when we had a fight. In Korea, I didn’t have that option. It forced us to sit down and figure it out completely on our own, and quickly. Because who wants to be mad at their only friend for too long? We learned quickly how to rely completely on each other and I don’t know of any situation where that would have happened for us if we lived stateside. Living abroad has taught us to love in a completely different way than I ever thought possible and I am eternally grateful for that.
As hard as it can be living away from family, friends and virtually anything familiar, we have found the benefits far outweigh the hardships that we have encountered from living abroad.
Thanks so much for having me Bonnie and congrats on your marriage renewal! I hope you’ll stop by my blog where I talk about our daily lives as expats in the land of kimchi, along with documenting our world travels. Be sure to say hi, I would love to hear from you!
Follow along on our adventures:
Blog | Blovlovin’ | Twitter | Facebook