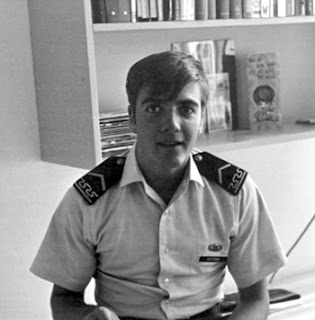 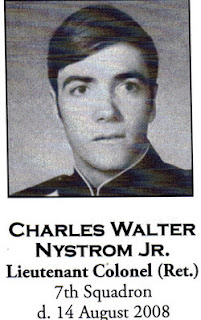 “Five years ago Faith Quick,
hit my dad from behind in her pickup,
and ran over him.
He died at the scene,
in the arms of a bystander,
while asking the bystander to call his wife.
Faith Quick received a sentence
of five days in jail
and one year of probation
to one count of misdemeanor DUI,
for being under the influence of marijuana
while driving.
I do not know if
14/08 means anything to her,
but to me
its the day
my dad
was taken away.”
I still vividly remember getting that phone call  on August 14th, 2008.  My heart had broken earlier that day due to another unrelated matter and I had no idea that my world would then go on to be shattered into pieces. It was my husband’s cell phone that rang and he who took the call from my mother.  From my husband’s military way of taking the call I had no idea what she could have possibly been telling him on the phone.  My head was already whirling around other problems in my life.  When Ryan got off the phone and told me that there had been an accident and my father had been killed it was as if he was speaking a foreign language.  My dad? No. No, certainly not. My mind could not even begin to accept it.  I actually thought he had said his dad had died and had corrected him.  He told me again and it cracked through my defenses.  It all hit me at once and I broke out in a fit of tears speaking out loudly ‘no, no, no, no’ until my voice shook so much that my voice broke and I was full on crying in a way I had never experienced before. 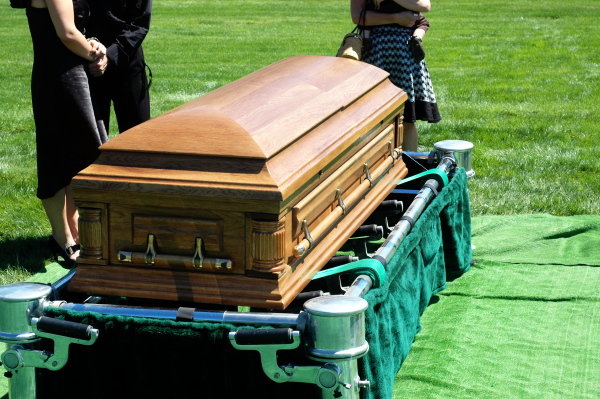 I remember my sons laughing.  They were only three and and one years old at the time and not understanding the type of reaction coming from their mum.  Ryan had to explain to them that I had just received some very bad news, but how do you tell your sons their grandfather was killed?  I made two  phone calls once I could speak again.  Once to call my mum back who seemed way more in control of the situation than I was and one to my best friend  Tammy to let her know and tell her I would be going to the mainland immediately for the funeral preparations. Everything else is a blur.  I remember vaguely sitting on a plane wearing sunglasses and sobbing during most of the six hours of flight travel from Hawaii to Arizona. 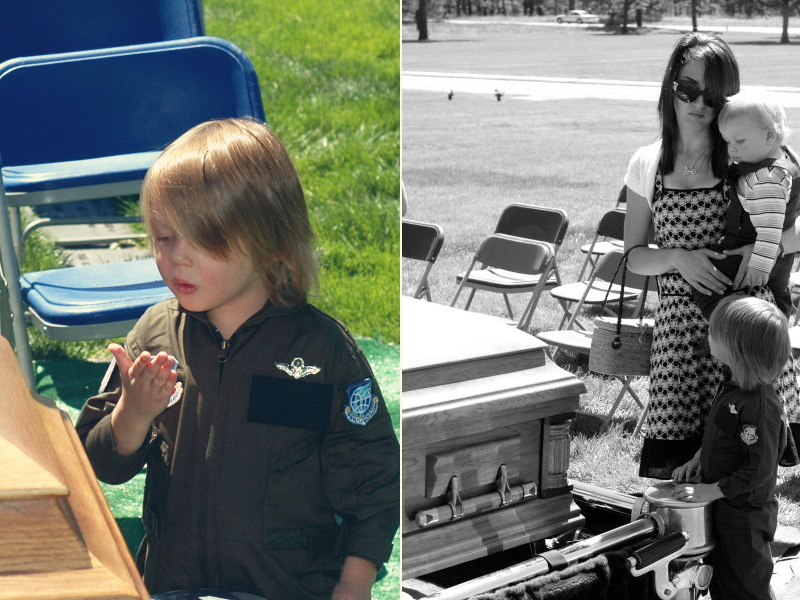 There was a lot of silence during the drive from the Tucson airport to my parent’s house across town.  When we reached the gated community it all hit me and I started crying again and then again when I got inside and found my mum’s arms to run into. There was a lot more crying to happen during those first weeks from the three of us Nystrom women who had lost our father, our husband, our friend.  We would not be alone in our grief as their were many others who would be pained and in tears.  His friends, his church family, his coworkers, and all his students from the school where he taught after retiring from the USAF.  We never got a chance to say goodbye.  He was ripped from our lives so fast and so unfairly.  All it takes is a moment.  That moment happened five years ago today. 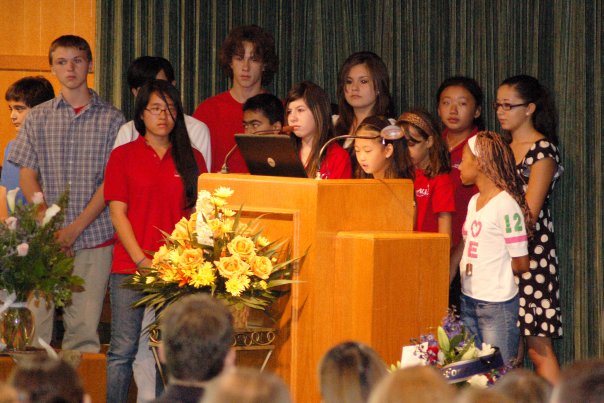 This is my story.
I tell it because you never know how much time you have with those you love.  My father served as an officer in the USAF since the age of seventeen, was the navigator and bombardier on the F-111 fighter jet during the first Gulf War, and stayed in the military for over thirty years.  As a military spouse my mum had prepared herself over the years for that official visit, if perchance something were to have happened to my dad.  Who would have thought that it would not be a man in a military uniform at her door, but a man in a police uniform and a matter that would have taken place on US soil that would have claimed his life? 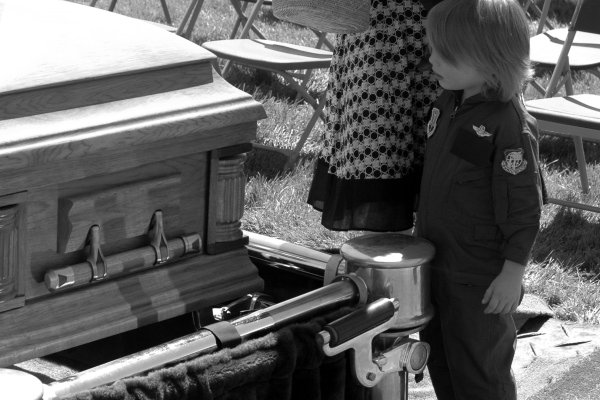 I tell this story because I would not wish this on anyone else.  Sadly my story is so similar to many stories out there. Stories of families broken up because their loved one was killed on their bicycle by someone driving a car, a truck, or a bus.  My dad is not the only one to have the local police department fail to do their job correctly.  Every year more die. 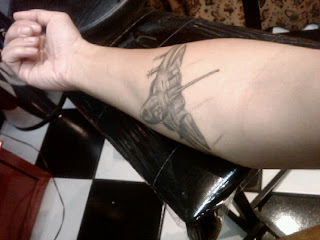 This is a story of a girl named Faith Quick, who lived in Tucson, Arizona.  Faith Quick had been charged twice by the police department.  The first a drunk and disorderly charge and the second for narcotics possession.  Faith Quick had been able to go through Diversion for both cases, something that should only ever happen once. Diversion provides many first-time offenders of specified categories of misdemeanors an opportunity to participate in relevant counseling rather than proceeding through the court system and establishing a criminal record.  To be fair, Faith Quick should have only gone through Diversion once and had had a criminal record with the narcotics charge.  On August 14th, 2008 Faith Quick was driving in a truck with her boyfriend while under the influence of drugs. Sadly like her name, Quick, she was too much in a hurry and driving too quick to observe what the other drivers around her were doing or notice the man with his bicycle. 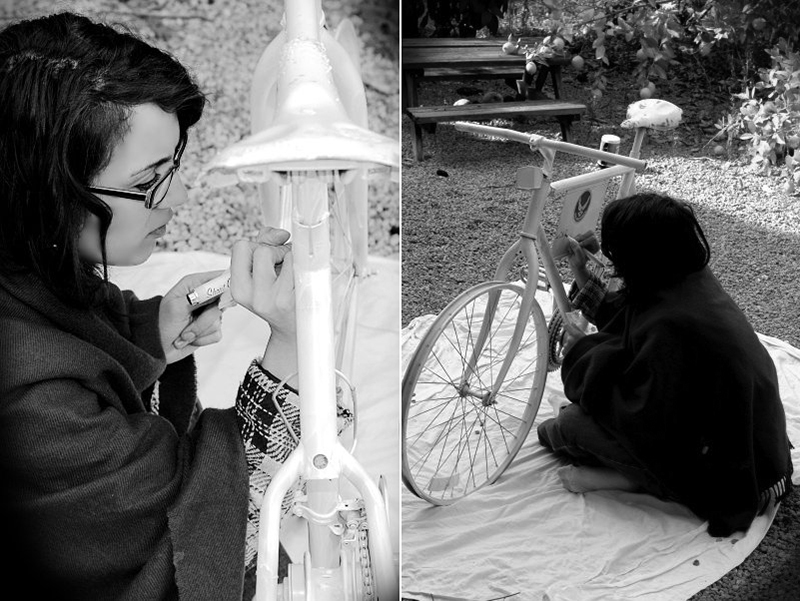 This is a story of  a retired  USAF officer, a school teacher, a husband, a father, and grandfather.  A man who instead of renting a car while his was down for repairs, decided to be green for the environment and take a series of buses with his bicycle every day to and from work to the other side of town.  On this day he was headed to meet my mother and sister at a restaurant just across the street from where the incident took place.  He was so close to having met them, so close to having made it safely to them.  It is a wonder they did not see my father’s mangled bicycle as they headed home another way, due to the stopped traffic, wondering where my dad was and why he did not show up to the restaurant or answer his phone. 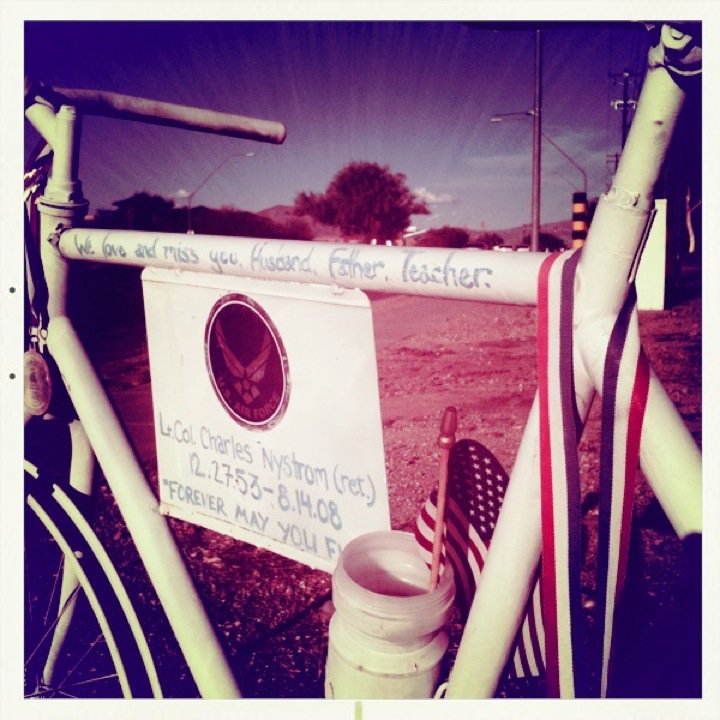 This is a story of why you should always be present and fully aware of your surroundings when operating a motor vehicle.  Why you should never get behind the wheel if you have any drugs in your system and for good measure let me add never ever touch your phone while driving.
Five years ago today on August 14, 2008, Charles Nystrom, my father and grandfather to my kids, was struck and killed. Cars in the two right lanes had stopped to let him cross. A third vehicle, driven by Faith Quick, changed lanes to the inside lane where she hit, ran him over, and dragged him a bit further. The local media reported that “the cyclist failed to yield…”, yet did not report that the driver, Faith Quick, was arrested and later charged with DUI for marijuana. They media did care to share the truth about a man in his fifties, and instead took advantage of the students he taught to show footage of children crying over the sudden loss of their teacher because it was better for their ratings.  I believe they later apologized to my mother after being confronted about their actions. 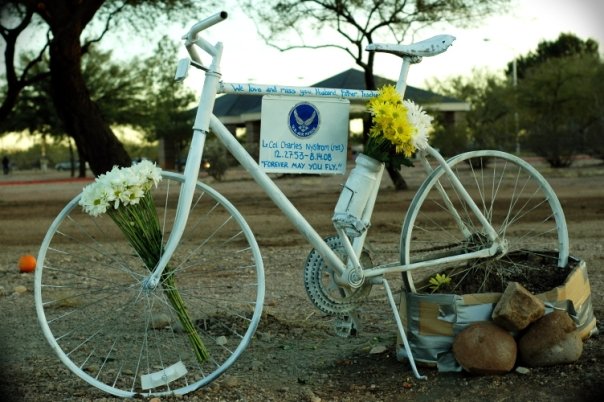 This is a story about how the driver, Faith Quick, later was sentenced to a mere 5 days in jail for accounts of being under the influence of drugs.  She was never charged for more or a higher charge because there had been no criminal record or paper trail to build a case on her prior charges and offenses.  The two cases of Diversion had seen to that.  Had someone done their job correctly before perhaps I would be writing this story differently. 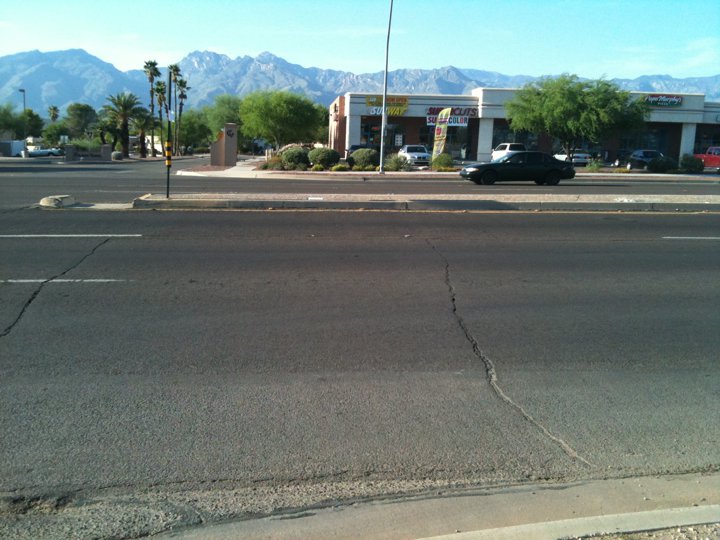 This is a story about the Tucson Police Department and how history shows they side with the drivers not the cyclists.  Due to the massively faulty police work on the scene, the insurance company USAA would not side with my father’s case.  My mum went on to hire a bike lawyer and hired two professionals who highly knowledgeable in the laws of the road, cycling laws, car accidents, etc.  They both were able to determine that my father was in the clear for his actions that day and that there was no way my father could have yielded to someone behind him driving in a motor vehicle. 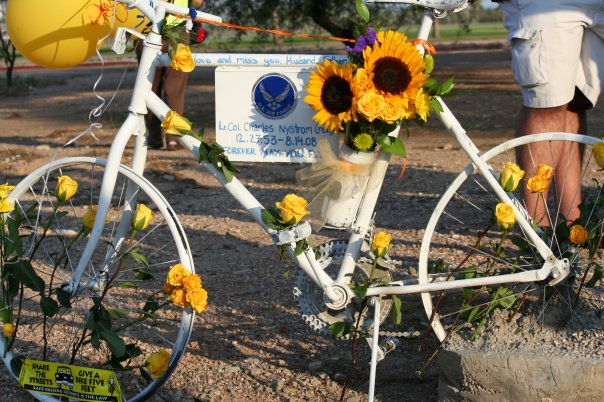 For such a great, kind, and giving man who served 30+ years as an officer USAF and a VFW from his time spent fighting in the Gulf War I still get very upset about how little the TPD did. Not to mention somewhere between the scene to the hospital his rings were stolen and never returned. 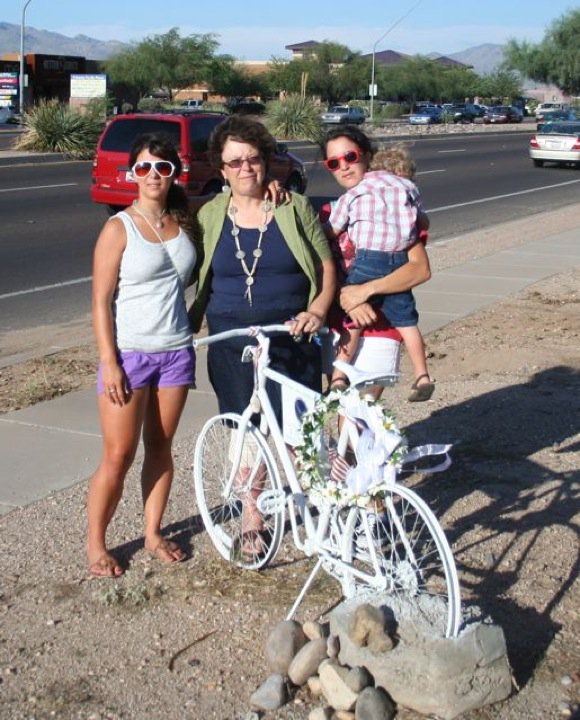 Faith Quick has still never been charged for my father’s death nor has she spoken any words to my family.  When her sentenced was carried out my mum was in the room.  Faith Quick had been upset that she would have to go to jail for five days and that her request to still go to work during those five days was denied.  No remorse for the bad choices made or the life that was taken, but was upset because she could not make money at work for five days.  Faith Quick now resides in Phoenix, Arizona. 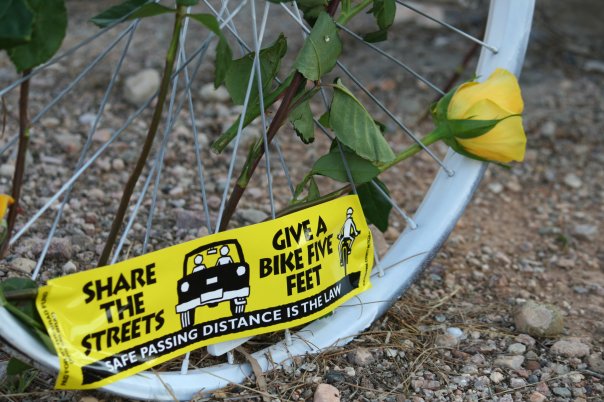 My father was laid to rest at the USAF Academy in Colorado Springs, Colorado where he started his career with the USAF with the class of 1975. A ghost bike was prepared and placed in the location of the scene where he died by my family as a reminder of his life that was lost and to all those who drive past to share the road. 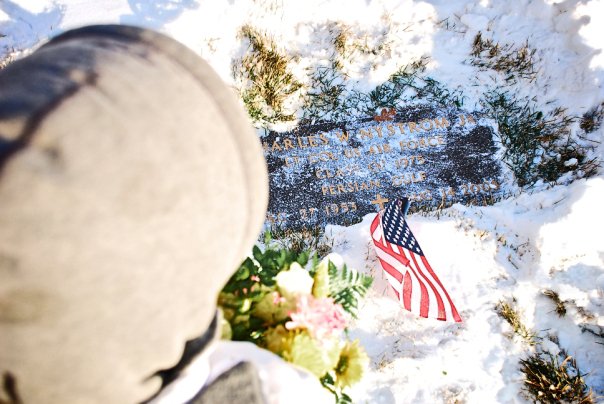 This picture was taken in 2010, the last time I was able to visit with my dad at the USAF Academy. 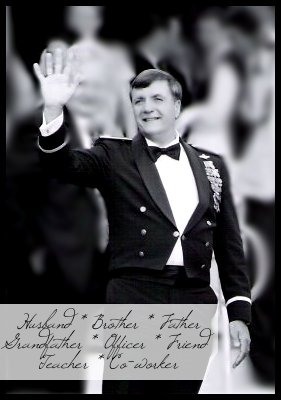 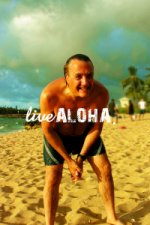 Please before you ever get behind the wheel make sure you are in the right state of mind to drive.  Never drive if you have drugs in your system, if you have been drinking, are sleepy, or have issues on your mind that would take away from your focus on the road.  You are sharing the road with many other lives. There is nothing so important that you have to be impatient, rush, speed, or check your phone.  All it takes is a moment.  Make good moments and good choices by being a safe driver.

*Photographs of my father belong to my family and Bonnie Rose Photography © 2007 – 2013 All rights reserved | www.bonnie-rose.co.uk
We have been reading the Hobbit with the boys. My dad used to rwad from this book to me when I was their age. I love re-experiencing Tolkien through their young eyes.