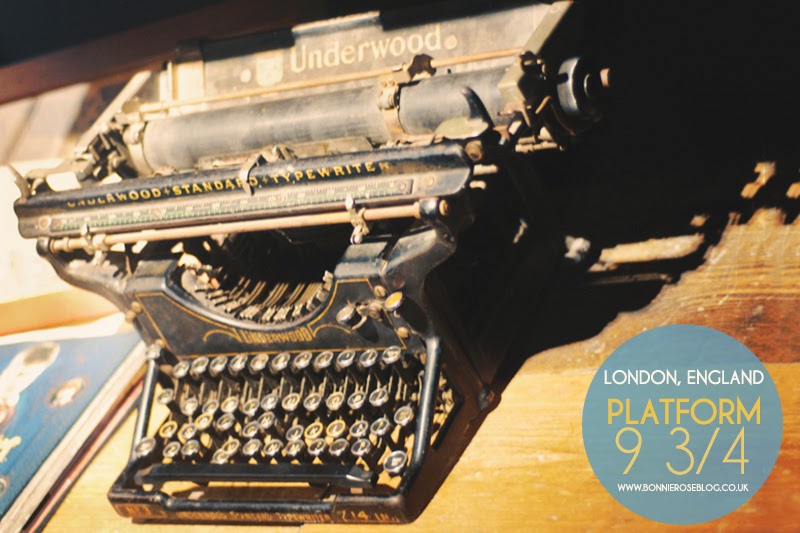 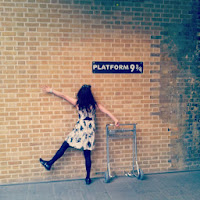 Welcome to Travel Tuesday! We are a family of three generations that love Harry Potter.  It began with my younger sister who started after the second book came out and my parents got hooked as they read them too. Feeling left out of dinner conversations I got roped into reading them and then wondered why I was the last to join the family book club.  I married my husband and got him into it and my kids as they were born. In fact Ronan was ‘baby Harry’ for one book release party and a howler for the one Maddox went as a baby Mandrake plant.  So being able to take my mum, sister, husband, and boys to get our photo taken at platform 9 and 3/4 this summer was mandatory while we were in London.  This was my second time here (see picture left) and they have since updated the wall and have added a gift shop. My thoughts on that near the end of this post.
Like Harry Potter too? I wrote about What I Have Learned from Harry Potter. 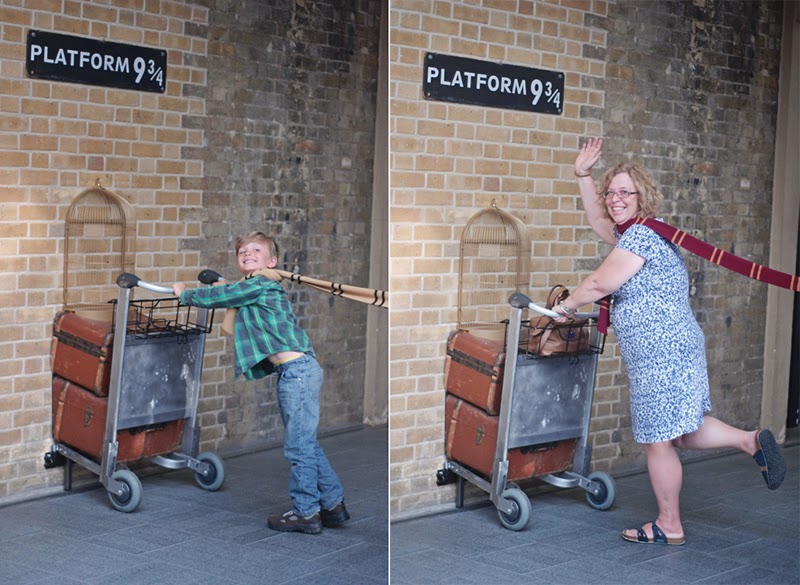 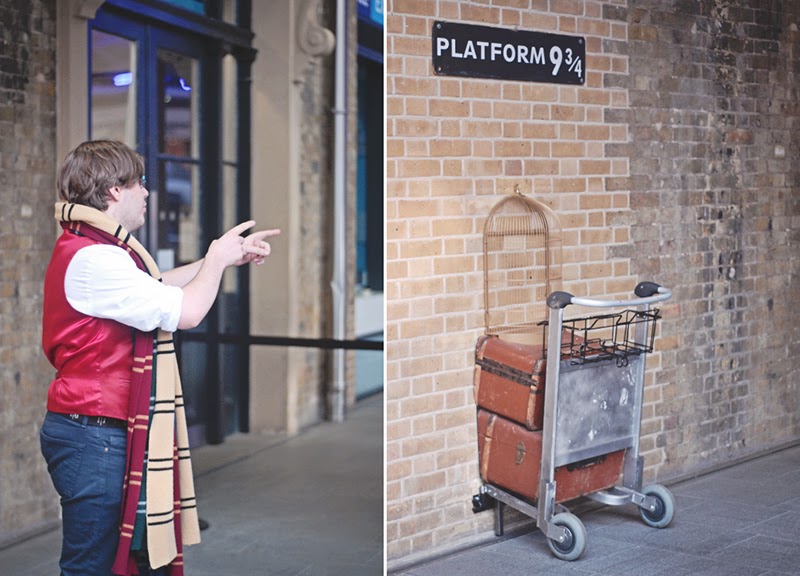 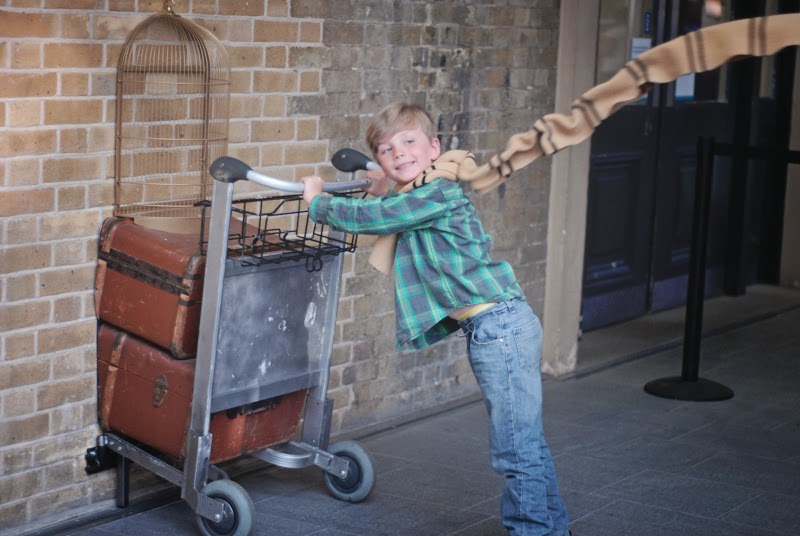 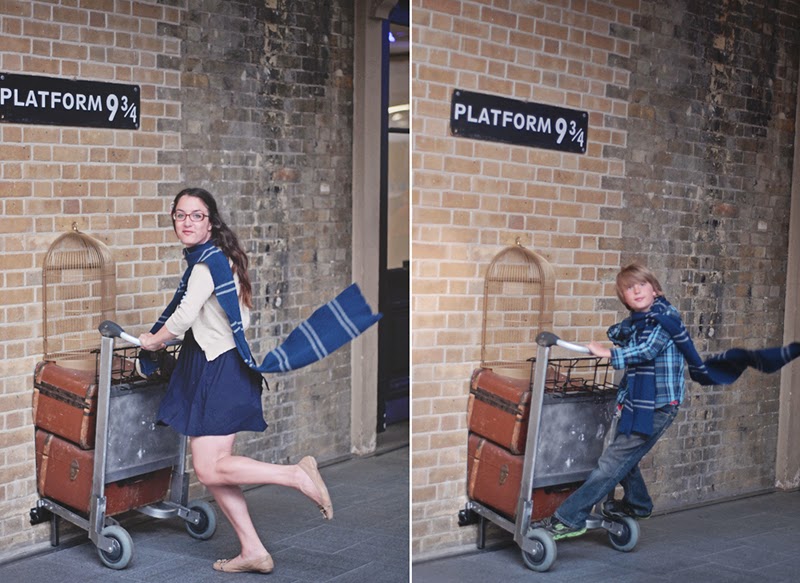 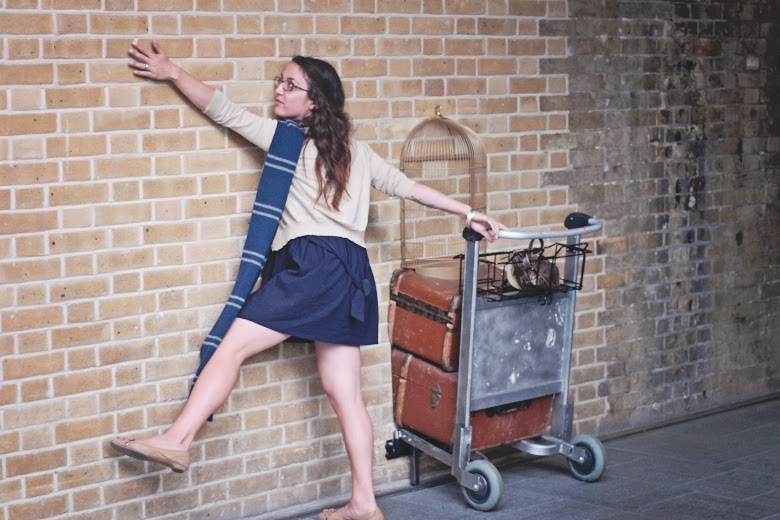 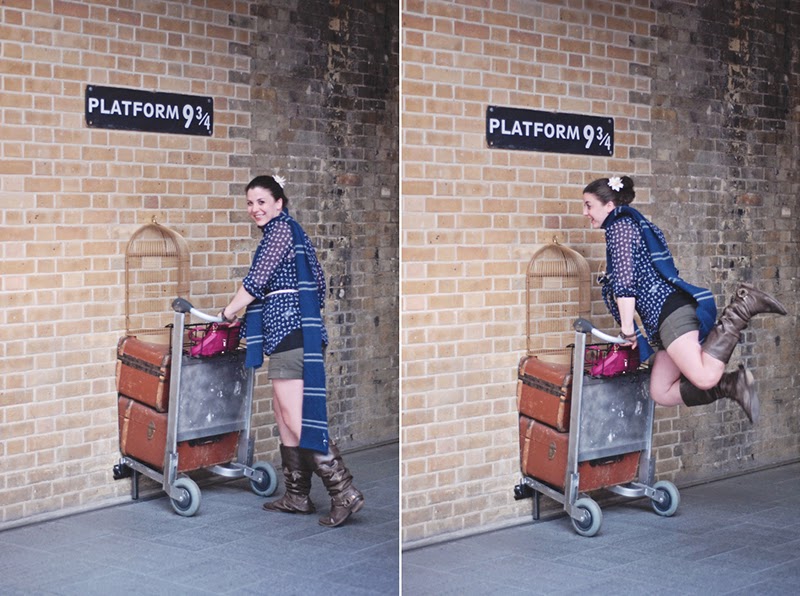 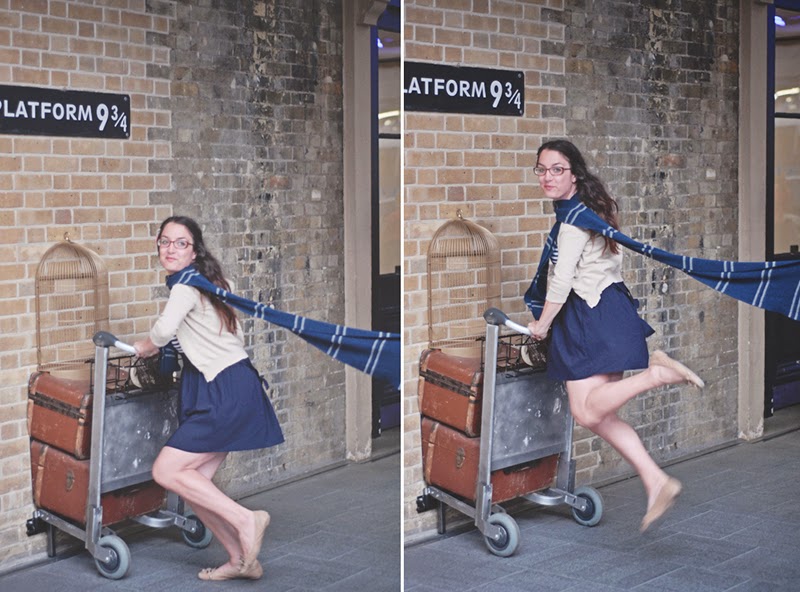 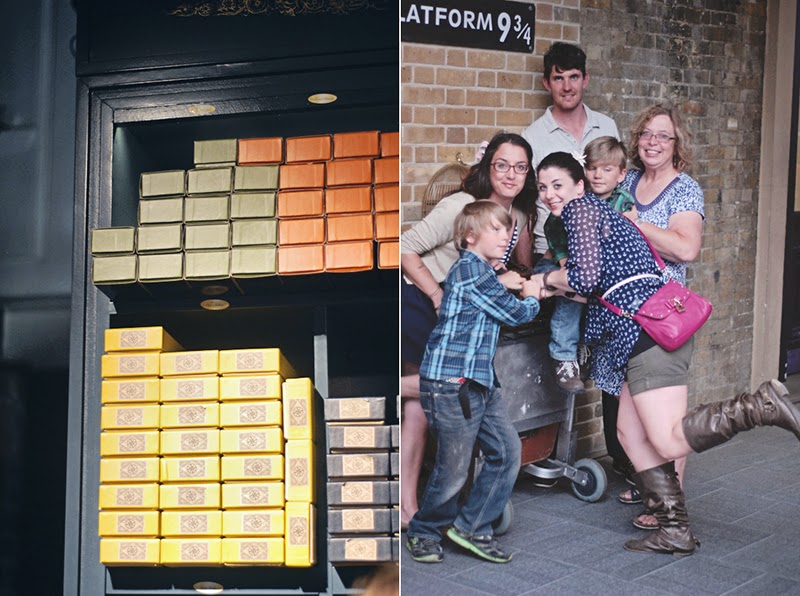 My Review of Platform 9 and 3/4:
When we we came before it was just the cart in the wall. In fact there was no partial suitcase or owl cage.  We were able to just walk right up and take as many photos as we wanted. So we took sweet and silly ones. Of course with having kids (as cute as they are) they may not always be in the mood to join in and my oldest was having one of those moments. So returning to do family photos for the Christmas card was on our todo list this summer.  Boy was I surprised to see how much it had changed!   I am taking a note that this could be different if we come again when it is not summer time but then again who knows.  There is a gift store right it and the portable queue markers likes you would find at Disneyland. There was quite a group of people waiting and I will say that everyone who was  there was very nice. In fact they did not mind that almost everyone in my party wanted to get their photo taken twice and then do a huge group shot.  I love the new editions to the the cart and I actually kinda like that they had scarves you could wear and helped flick it for movement for you.

If I was not a photographer this next bit would not have bothered me so much.  I am sure many people come every day and never have this view point…or I just love Harry Potter way too much and my expectations got shattered.  I usually always have my 50mm on my DSLR because it is a great portrait lens and I was getting nice portraits of my mum and sister with my family while they were visiting.  However due to the close proximity of the queue of other HP fans and where the staff members were located there was no way to get a ‘perfect’ shot. I had to shoot off from the side and I could not get back as far as I needed too. For the portraits I took it ended up being okay but for my portraits the family member that took my photo cropped out important parts of Platform 9 and 3/4.  Not to mention the lens did not work for our family shot when we had to all look sideways.

The answer for that would be okay I will rely on the photographers they have to take our portraits. They are armed with nice DSLRs and flashes and look all professional with their HP staff badges. Everyone gets their photo taken in time with the guy who fluffs the scarf in the air. You can view your photo at the gift shop and purchase it to take home.  So I thought…sure maybe we can get the family one from the store. The gift shop was not the place to be if you do not like small cramped spaces as it does not do well with crowds of people.  Then when I finally saw our photo my heart sank. I maybe would have taken it if it was free but I certainly was not going to pay money for that shot. It was horrible.

Here is my thought on purchasing the photos.  Right above where platform 9 and 3/4 is located they have huge wonderful skylights. So unless it is nighttime or extremely stormy out you are going to have wonderful natural lighting coming down like you were in a fabulous photo studio.  Yet the staff taking photo use their flash for every one. I cannot comment whether they change their settings during their shift but after seeing our photo I would have definitely changed the exposure and better yet taken it without the flash.  It was the one time I got really frustrated. It really is hard when you know so much about a something that it kinda ruins the experience when it is out of your control. So we did not buy that photograph and we walked away with photos that despite the weird angle are far better exposed.

My husband reminded me that they also say to you in the queue something to the tune of ‘You can take your own photos but they will not be as good as ours.’

I love Harry Potter and I hope to go again and maybe beat the crowd control during a quieter time.  Also cannot wait to go to the Harry Potter tour in London too! Have you been?

———-
Share your Travel stories and wanderlust addictions.
HERE IS HOW IT WORKS:
1. Share a post about travel! From road trips to trips abroad and from past travels to dream vacations. You can write about travel tips and tricks, favorite places to stay, or anything in between! Just make it about traveling somewhere!
2. Grab the lovely button. If you run into trouble, just make sure to mention Bonnie in a link! 😉
3. Linkup goes live every Tuesday at 8 am GMT.
4. Hop around and meet new travel loving bloggers! Link up will be open for a few days, make sure to check back to visit some of the newer travel posts!
5. Please only one linked up post per blogger. Save other posts for future linkups!
6. The First Tuesday of every month will be a themed prompt if you want to join in! 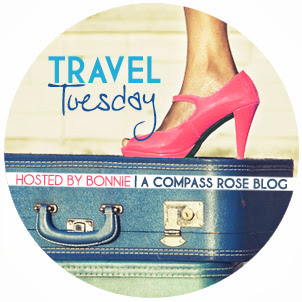 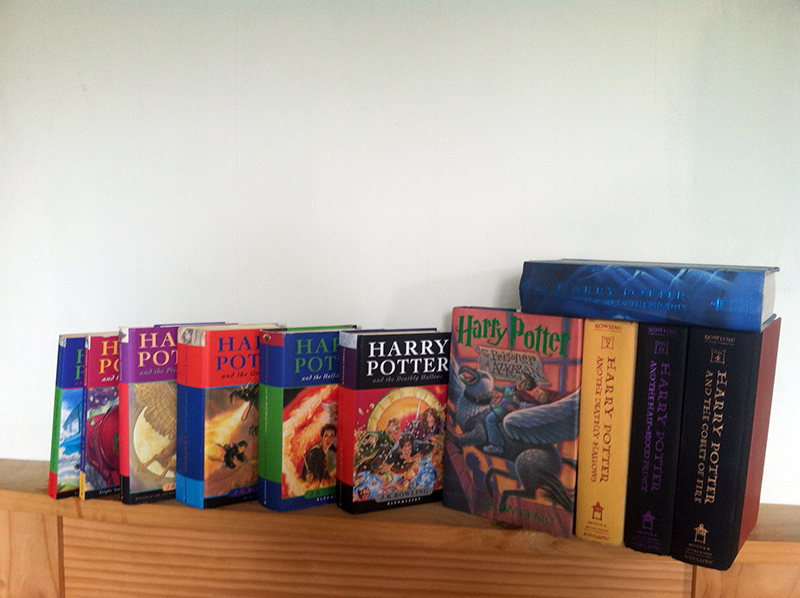 #BlogEveryDayInMay
*photographs found here  are sourced or  belong to Bonnie Rose of Bonnie Rose Photography © 2013 All Rights Reserved | www.bonnie-rose.co.uk
Before I touch on football, a big Congratulations to my Lil’ Roro for winning first place in the art competition for Purple Pinky. We are so proud of your accomplishment and seeing that sweet smile when you found out you won just melted my heart. I love you, my little man. xx 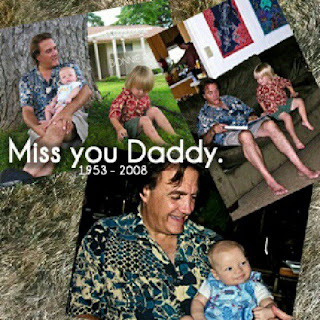