It is Mother’s Day in the ol’ US of A, but since we already celebrated this holiday here in the UK I did not make it a big deal with my boys. Besides is not every day mothers’ day? 😉

To celebrate Maddox Charles Aherin‘s last day as a four year old we went to the Levity III Luminarium at Lindfield’s Art Festival after church. It was truly a spectacular activity to experience as a family. The boys got to take a hula hoop class from some pretty hippy girls with their ‘High Hoops’ troope and taste some Gluten Free cupcakes. Plus we bought the book in which Ronan’s poem was published. Family Days are certainly Fun Days in life.

At Linfield Art festival with my boys. Ronan had his poem published in a book, so we are here to find and purchase a copy.

@the_bonnierose on Twitte · via Twitter
This morning’s walk to church was rather quite cold.  It was definitely gloves and scarves weather.  The boys were fascinated by the fact that we could see our breath, and Ronan pretended he was a steam engine.  I chose a strapless dress for church that I layered over a few pairs of leggings and tall black socks to keep my legs warm. I really should have tossed on a sweater as another protective layer against the cold beneath my jacket.  Even though I did not take my coat off in church, I would have welcomed the added warmth.  Despite the cold, we were aware of all the beauty around us as we made our way to Lindfield.  I am not a big fan of spiders, or really at all.  But for some odd reason I was not shying away from the plethora of webs that were visible this morning.  If it was not for the morning dew that adorned them like jewels, I would not have even taken notice.  Even though my cell phone battery was running low and my hands were cold to to be out of the gloves, I kept taking photos of all the webs on our walk.  I have posted a few of my favourites as well as the beautiful poppies that were up at the church.  Hope everyone had a blessed Sunday, I know I really enjoyed spending mine with the boys. 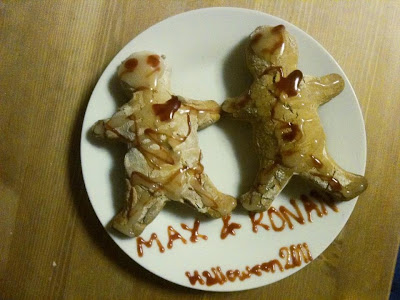 I will be upfront and honest that Halloween has never quite been one of my favourite of holidays. Growing up I was frightful watching films like It and Freddie Krueger. Do not get me wrong, I love a great Alfred Hitchcock film, but willingly watching something I know will scare me is not my cup of tea. The last time I was in a haunted house I was a freshman in high school and I remember pushing my friend over so I could run out after something had jumped out at me with a chain saw. Two years prior I had worked at a Haunted House on base, which was more enjoyable but ended up slipping on fake blood and breaking my arm. Needless to say I do not harbour a strong appreciation for attending scary houses on Halloween. Growing up in Europe, though surrounded by americans on the military bases, I had a much more subdued versions of Halloween than the average American growing up in the United States. There was one year that my sister and I could not get a pumpkin, because they had sold out so fast at the commissary on base. Not wanting to be deprived of the seasonal festivities, we took apples from the kitchen and carved them instead. You may be thinking if that is even possible, and while they may not have been very pretty, they did the job at least.

From as far back as I can remember, my mum had this rule where my sister and I could not dress up as anything scary. I remember being 6 or 7 years old and wanting desperately to be Glenda from the Wizard of Oz, one of my favourite childhood films. Despite my persistence in the matter, I was turned down on the fact that even though Glenda did ‘good’ magic, she was a witch and that was classified under the ‘What Not to Wear for Halloween’ category. I loved dressing up all the same and that has become the one thing I really enjoy about the holiday. My partner on the other hand, has grown up loving the holiday and has a mother whom on every Halloween dresses up like a scary witch and hands out caramel apples to the neighbours. Once we had kids we had to see how to start new traditions with our family. While I still hold onto the ‘no scary costumes’ rule, we have allowed some halloween decorations to enter our house. This year we even had a one of the shelves on our bookcases dedicated for all the Halloween crafts that the boys made. Since Ronan and Maddox both love cooking (and eating!) I picked up a halloween cookie recipe that we did together as well as watching kid cartoon films based on the holiday like Garfield and Scooby Doo.

aNow where that is how Halloween has been experienced in our family, we had the opportunity of experiencing it together for the first time in England this year. I honestly do not remember dressing up for Halloween or doing anything for the holiday at all when I was a young girl living in England many years back. It is still not a very big holiday here, though it has grown in popularity in the last 20 years. The one thing that jumped out at me was how all the fancy dress (aka costumes) items at the store are based on the generic Halloween characters like vampires, werewolves, witches, skeletons, and ghosts. Basically all the things I would not have been allowed by my mum to wear for Halloween. One of the perks of my job is that I get to meet a lot of people, and talking about holidays and cultural customs comes up quite frequently with my clients. I would bring up how my kids were going as comic book characters (Batman and Green Lantern) and I was surprised with how many reactions I got to their costume choices because it was not “Halloween” fancy dress. With that said when we did go Trick or Treating, we saw not a lot of variety of costumes and it was mostly older kids like teenagers that I saw out or adults in costume at parties.

For our family we ended up squeezing in two different actives on Halloween. I picked up my boys from school and as soon as we got home I quickly made them sandwiches for tea while they got changed out of their school uniforms. We lefts straight away to walk to Lindfield where we attend church on Sunday. It is about an hour walk, if I go at the boys normal walking pace, but it is a beautiful walk that we enjoy together. Ryan joined us from the train station, after getting out of class, and we attended the Hallelujah party at the church for the evening. The boys got to do crafts and games and enjoy a yummy supper of bangers and chips with orange squash to drink. Afterwards there was glow sticks, singing, fireworks, and a chinese lantern was lit into the sky. We had a really nice time, despite how tired the boys were from school already. On our walk back home I had the boys change into their Halloween costumes, and we went trick or treating at a few houses that were participating in the evening and one pub had candy out for the kids to take. I think the boys were a little disappointed that their candy bounty was quite a bit smaller than years past, but with everything we fit in for the evening they had a lot of fun. I really enjoyed just being together as a family and watching the smiles on my boys’ faces. A smile is precious and nothing is more priceless for this proud mummy of two. 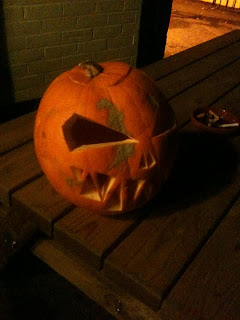 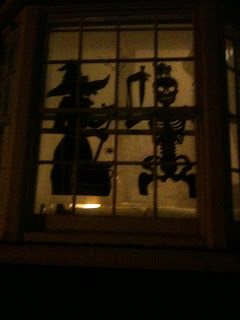 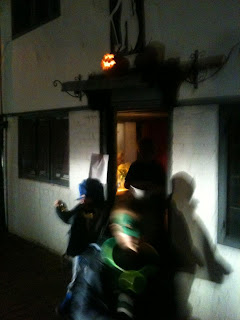 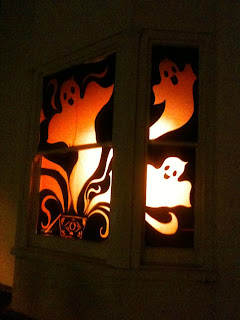 A few photos from Trick or Treating in Lindfield.
The houses that were participating had a Jack O Lantern or Halloween decorations in their windows.